The story of Corto Maltese

My name is Corto—Corto Maltese
I was born in Malta on July 10, 1887– at least that is what I am told.
Of my early childhood I recall a flag full of crosses and a red beard, my father’s. My mother? A gypsy from Seville. She was so beautiful that the painter Ingres fell madly in love with her. (I don’t know if this is true; she never spoke to me about these things.)

I recall a beautiful house and a patio full of flowers–it was close to the mosque in Cordova—and I remember well the day a friend of my mother’s took my left hand and gazed at it in horror: I did not have a Fate Line. I didn’t think about it for long–I took one of my father’s razor blades and cut my own Fate Line, long and deep. I doubt that I increased my dose of luck, but I’ve always been free, and that’s good enough for me. 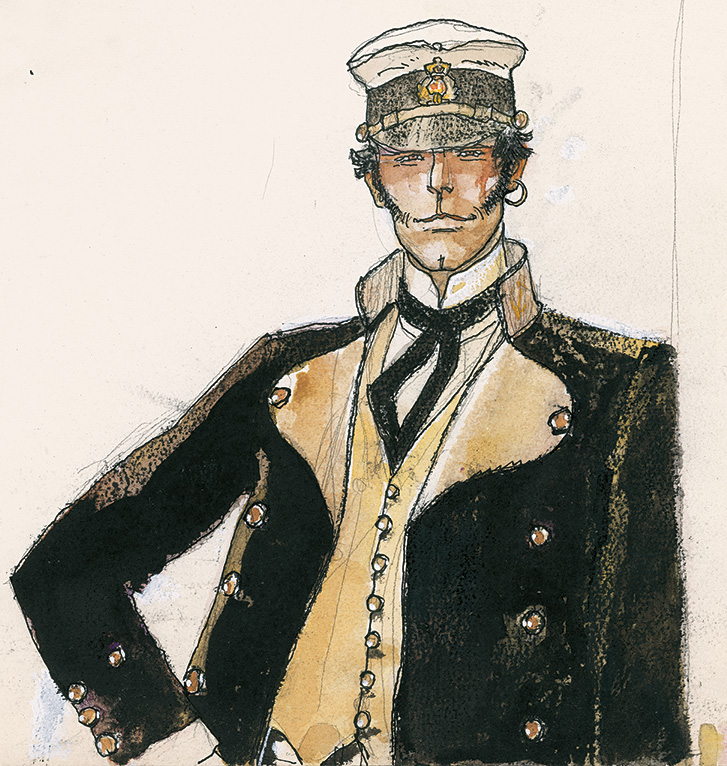 My father was always leaving, and over time he came back less and less often. He was from Tintagel, in Cornwall, a place full of fairies and wizards. He claimed to be the grandson of a witch from Man who had a red cat, but then again, he said a lot of things when he got lost in his bottles. I studied at La Valletta Jewish school and then in Cordova with Rabbi Ezra Toledano. It was he who initiated me into the Torah and told me other secret stories.
At any rate, what I remember best is the day I left Malta. I embarked on the Golden Vanity, a magnificent three-masted ship, and ever since then I have been sailing around the world. I have met Rasputin, Jack London, and many others; I learned to dance the tango in Buenos Aires; in the Antilles and Brazil I met Esmeralda and learned about voodoo rituals. Then there were the Indies, China, and the Caribbean islands, with those lazy verandas and shootings; the Pacific Islands, including Escondida–the strangest of them all–among monks and pirates. I saw a train loaded with gold fall into an icy lake in Mongolia; I have shared the desert silences with a warrior, and greenery and tears with a beautiful Irish fairy; and I’ve searched for jewels and impossible dreams along the canals and above the roofs of Venice.
I’m not a hero. I like to travel and I don’t care for rules, but I respect just one: I never betray my friends.
I’ve searched for so many treasures and I’ve never found a single one, but I’ll keep looking, you can count on that; just a little bit further on…

Corto Maltese was born on July 10, 1887 in La Valletta (Malta). His father was an English sailor, originally from Tintagel, in Cornwall. His mother was a gypsy from Seville. His parents met in Gibaltrar, where she went by the name “La niña de Gibilterra” [“The Gibaltrar Girl”] e apparently modelled for the painter Ingres (1780-1867).

Corto Maltese’s childhood is spent in Gibaltrar, then in Cordova where he lives in the Jewish Quarter. He attends La Valletta Jewish School, run by the Rabbi Ezra Toledano (Corto’s mother’s lover when they were both in Cordova). At the time of the Boxer Rebellion (June-August 1900), Corto is in China.

At the beginning of the year, at La Valletta, Corto embarks as a sailor on the Golden Vanity; thus he begins his travels. He stops in Egypt, where he visits the pyramids at Giza. In February he reaches Ismailia, and subsequently stops at Aden, Mascate, Karachi, Bombay, Colombo, Madras, Rangoon, Singapore, Kowloon, Shanghai and Tien’Tsin.