The debut of a new, English-language edition of the classic anti-hero, Corto Maltese.

Corto Maltese by Hugo Pratt: The Ballad of the Salt Sea is the adventure that saw the birth of the legendary character, Corto Maltese, a “cult” icon of the world of European adventurers.

Hugo Pratt’s drawing shows attention to and familiarity with authentic exotic details; these are not images gleaned from shelves filled with National Geographic magazines. There is absolutely nothing that is purloined, or even borrowed, in Pratt’s work; even his irony seems to come from some absolutely unclassifiable experience. —  Frank Miller

When I want to relax, I read essays by Engels. When I want something more challenging, I read Corto Maltese. — Umberto Eco

Treasure hunter, sailor and adventurer, Corto Maltese continues to be one of the most popular characters of European “drawn literature”; among his countless devoted fans are many American readers and artists.

Initially published in 1967, Corto Maltese: The Ballad of the Salt Sea introduces this hero for the first time. The story begins around the time of World War I with Corto Maltese adrift in the Pacific Ocean. He is picked up by Rasputin, a Russian pirate-corsair. The story centers around Corto’s adventure.

Corto Maltese: The Ballad of the Salt Sea is sure to be popular with sophisticated readers of classy adventure stories.

Pratt was inducted into the Will Eisner Award Hall of Fame in 2005. 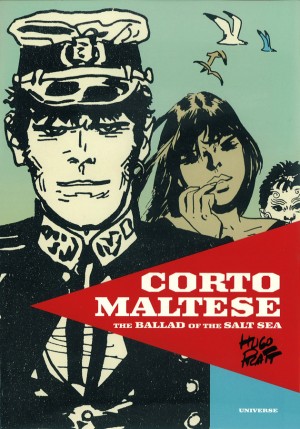