Corto Maltese – The Ballad of the Salty Sea

July 10, 1967 – 2017. Fifty years after its first appearance, a timeless classic returns in grand style: The Ballad of the Salty Sea.

When it was published in 1967 in the brand new magazine, Sgt. Kirk, “The Ballad of the Salty Sea” immediately attracted attention for its uniqueness: a wide-ranging narration in which the characters reveal themselves a little at a time, captivating the reader in unexpected ways. So unexpected that, at first, Corto Maltese appears to be merely a supporting actor: he is a shipwreck survivor who slips into the story by chance, steals the scene, and subsequently secures a leading role in comics worldwide.

Today, on the 50th anniversary of the first edition, “The Ballad” presents itself to its devoted readers decked out for the occasion: an impressive format, a gallery of very rare drawings, and a rich afterword to guide us in the discovery of all the cinematographic influences (among others) which shaped this immortal masterpiece. 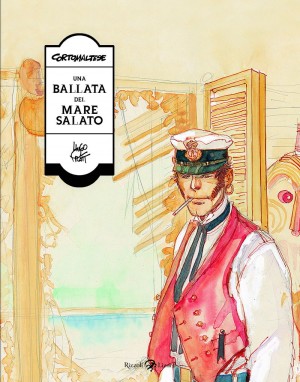